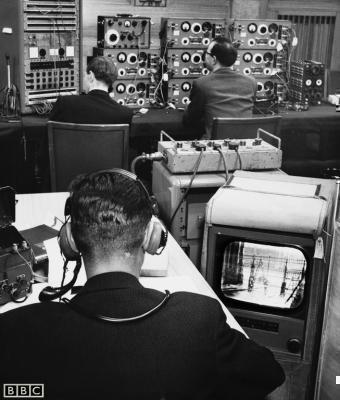 June 1954 marked the start of a transnational network for the free exchange of television programs.

The European Broadcasting Union officially launched the Eurovision network with a month full of television programs that featured Europe, ranging from the "Fête des Narcisses" in Montreux to the famous Sienna horse race. The events were the largest experiment in the history of television at the time.

The Eurovision relaying of the live events required simultaneous sharing of moving visuals, combined with a sharing of the so-called "international sound track." In particular, the differences in the line standards in use in Europe caused technical challenges. The greatest challenges concerned language differences. The limited bandwidth made it impossible to transmit the voice-over of the commentators from all participating countries in parallel. A "guide" or commentator at the program end gave information to commentators in the receiving country, who then gave their national interpretation by means of voice-over.

The 1954 broadcasts laid the basis for future Eurovision reporting. When the British state opened its parliament in 1958, Eurovision reporters performed a live voice-over, which made it possible to share the live event internationally. "Local" reporters have often had to improvise commentary for Eurovision pictures. For many years, the separate sound feed has meant that the supposedly "pan-European" event is actually much more divided.

Many in the BBC audience for the famous Eurovision Song Festival used to tune in partly to hear the sarcastic commentary by presenter Terry Wogan, who performed the BBC commentary from 1971 to 2008.