Bringing the world into your living room 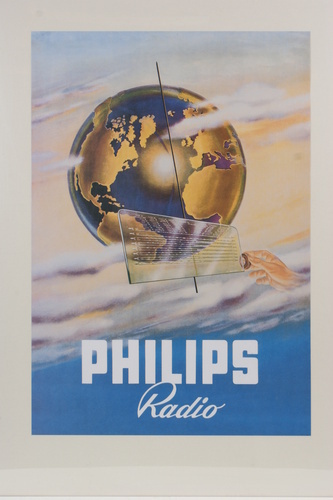 Print of a Philips Radio advert.

Daily radio broadcasting entered more and more (although mostly upper- and middle-class) homes during the late 1920s and early 1930s.

Increasingly, this also meant making radio sets part of the home. Loudspeakers started to replaced headphones, which enabled listeners to sit at a distance from the set and converse if they chose. Set makers also began to explore ways of simplifying tuning so that listeners could set the device and sit back.

In 1930, the British manufacturer Murphy proudly announced a wireless set that had only two knobs for tuning. Besides easing the work for the hands, new radio sets tried to make the work of tuning easier on the eyes, with new forms of radio dial that no longer displayed numbers, but the names of places.

Because the place names were often the location of the transmitter, unknown and exotic-sounding names like Goonhilly (Britain), Hilversum (Netherlands) and Beromünster (Switzerland) became part of a new European map of the airwaves.

Together with program guides, which normally displayed programs from throughout Europe (and beyond), and radio advertisements that emphasized the connections with the whole world, radio listening was promoted as a virtual trip around the world.

Listening to the radio