Bringing your living room into the world? 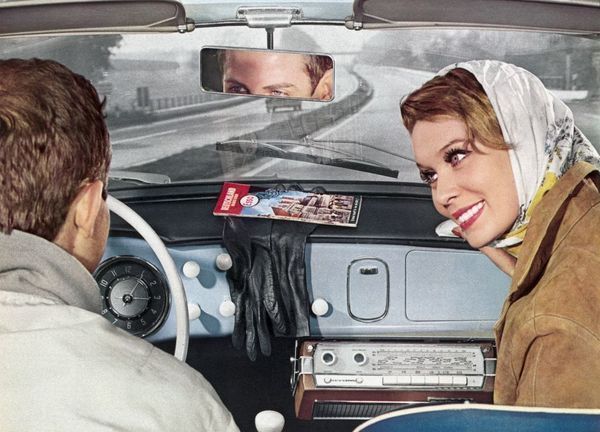 In a recent study of car cultures, a German interviewee described his car as "a drivable living room" – not least because of the calming comfort of music from the car's music system.

The role of radio as a portable music-maker and mood regulator began to take off in the mid-1950s in Europe. Transistors allowed radio manufacturers to make even smaller portable sets, while the amounts of free time and money that people had to spend on consumer goods began to increase.

To meet the needs of a more mobile public, German manufacturers such as Graetz and Grundig started to introduce small transistor sets with a dial and controls on top so they could be carried or mounted under the dashboard of a car. Radio marketing and program production also began to change. It was no longer about tuning in faraway places at home, it was about going places to tune in.

In 1975, Philips advertised with the slogan: "On the roads of the world with a Philips in your car." Picnics, beaches, swimming pools, and cars increasingly became the visible places for radios, especially as television continued to spread. The development of FM broadcasting, with its shorter range and multiple stations, meant it was no longer practical to try to list stations by cities on the radio dial.

For car drivers in particular, this was not meant to be a problem; the radio was shown alongside a number of easy-to-reach 'accessories' by the driver's seat.