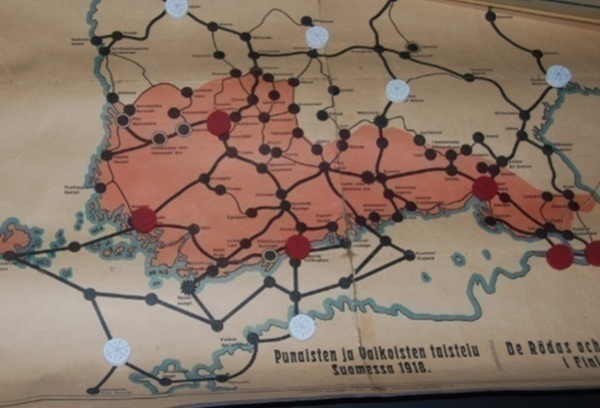 The development of a railway network in Finland under Russian domination suited the interests of the empire rather than the Finns.

In the first place, it was meant as a means of military and political control over the country. For example, the Russians realized that the first railway line between St. Petersburg and Helsinki ran too close to the coastline and could have been easily fired at from enemy ships. They soon built a parallel line, running further inland.

Ironically, during the Civil War of 1918, this relatively safe line helped to sever ties between Finland and Russia. Controlling this line played a major role in the victory of the White troops, who after the collapse of the Russian Empire and Finnish independence, sought alliance with Germany and greater distance from Soviet Russia.

Railways not only facilitated the transport of troops and armaments. Armored trains, possessed only by the Reds, ensured their initial military advancements and literally were used a tool of conquest. By capturing and holding crucial railway junctions, however, the Whites managed to keep such weapons contained.

Just a year after the war, a very popular board game appeared on the market. Players could assume the roles of Red and White commanders. The fact that the paths over which the game pieces could move reflected the rail network of Finland shows the understanding of its importance during the war.