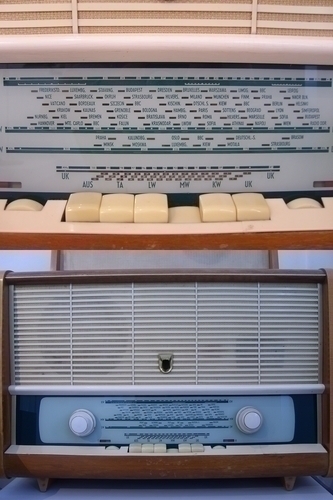 After the Second World War, radio set manufacturers had to deal with a new radio landscape as well as a new political landscape.

Within the newly-divided Europe, international radio broadcasting of various kinds took on a new role. In many countries in Western Europe, the American Forces Network became a common local presence on the airwaves, as did long-distance commercial stations like Radio Luxembourg and 'Europe No. 1' in the Saar. On the shortwave band, propaganda stations like Radio Free Europe, Vatican Radio, and Radio Moscow were a constant presences.

By the 1960s, radio designs for domestic sets from all over Europe came to look very similar. a wide, flat base, two rotary knobs for tuning and volume, plus buttons in the front for switching bandwidths between long wave, medium wave, shortwave, and soon FM was also introduced. What differed strongly from country to country were the stations shown on the radio dial.

While dials made in East or West showed mostly stations on their 'preferred' side, the division was never complete: on radio dials the 'Iron Curtain' was invisible.