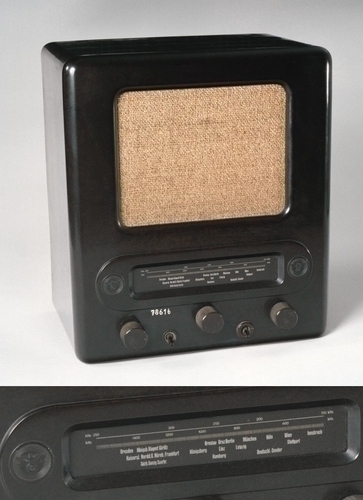 Perhaps the most famous pre-war radio set was the German Volksempfänger (people's wireless set), a series of cheap radios introduced by the Nazi regime.

The sets, which all of the major manufacturers were required to produce, were designed as part of the regime's efforts to get all citizens to tune in to the German nation, and to Hitler specifically. The first model, the VE 301, was introduced in 1933, with an already low price of 79RM, which could be paid for in installments. Several other Volksempfänger models followed.

Common to most of them was a tuning wheel that only had numbers on the dial, rather than cities, to emphasize listening to the speaker rather than "roaming" in the airwaves. One exception was the VE301-dyn, (shown here) introduced in 1938, which was the only model with an electrodynamic speaker. Instead of a whole world, however, this "dynamic" model only showed stations within the German sphere of influence.

Contrary to popular belief, however, Volksempfänger were also capable of tuning in foreign stations. One former owner of the device told historian Karin Falkenberg about a discovery she made while tinkering with the device's notoriously loose tuning dial:

'There was this little wheel you could turn and certain German stations were there, but if I wanted to hear foreign stations, I had to push down harder on it. Then I stuck [a flat] little stick under the dial, and then other stations came out.'