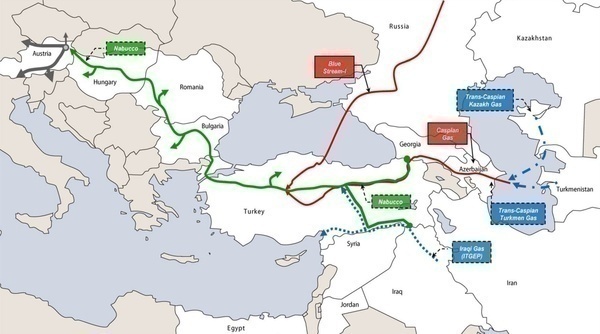 One of the boldest schemes for supplying the still energy-starved Europe is the Nabucco gas pipeline, which is designed to link Europe with the gas fields of the Middle East.

At a cost of eight billion Euros, construction of the pipeline was originally scheduled to begin in 2009 and finish by 2012. With its planned capacity of thirty-one billion cubic meters of natural gas a year, it would have greatly reduced Europe’s dependency on Russian delivery. Although vigorously pushed by the European Union, the entire project has been delayed for different reasons, including the political instability of some prospective suppliers.

The end point of the Nabucco pipeline will be in Baumgarten, which for many years symbolized the junction between the East and West gas pipelines grid. With the amount of gas pumped in from Nabucco, it would become the major European energy hub. South Stream, Russia's equivalent of Nabucco, would be filled with Siberian and Central Asian gas and would reach customers in European Union without passing any transit country.

As with the proposed North Stream pipeline, which linked Germany directly with Russia under Baltic Sea, the South Stream would reach Bulgaria beneath the Black Sea.

Gas pipelines in use