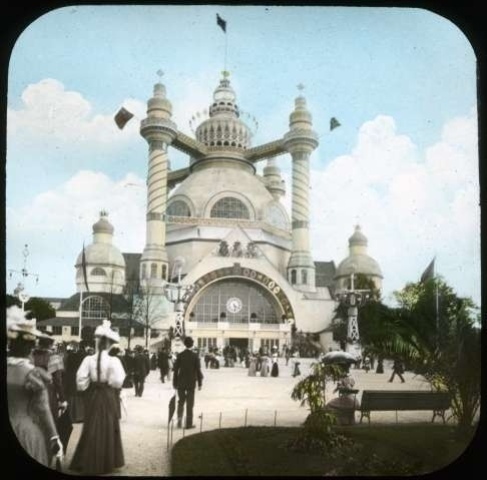 The hall of industry at the Stockholm "General Art and Industry Exhibition" (Allmänna konst- och industriutställningen), 1897

Universal exhibitions are a curious mixture of trade fairs, secular and religious ceremonies, and folk games.

They not only featured "high-tech" displays, but also many kitsch products that were better classified as "oddities." Such inventions were particularly numerous at the first London exposition in 1851.

A so-called "<a href="http://www.victorianlondon.org/communications/comictelegraph.htm" >comic electric telegraph</a>" with a brand-new "inter<i>face</i>" could visualize letters and words sent through an ordinary telegraph by manipulating a mechanical face.

Caught between wanting to show both the highest levels of progress as well as unique 'national' characters, both past and future at World's Fairs often took on a carnival air. Spectators could travel between the 'future in the present' industrial temples (associated with European nations) to the supposed 'past' in the present: displays of 'traditional' cultures found in the colonies, where 'natives' had to parade for spectators in special displays.

Sometimes these were combined: the very first moving pictures shot in Sweden were at the 1897 "General Art and Industry Exhibition". Films, however, were not displayed in the futuristic-yet-neo-Baroque industrial hall, but (along with other technologies such as X-rays) in 'Old Stockholm', a half-scale model of the city as it had been in 1500.