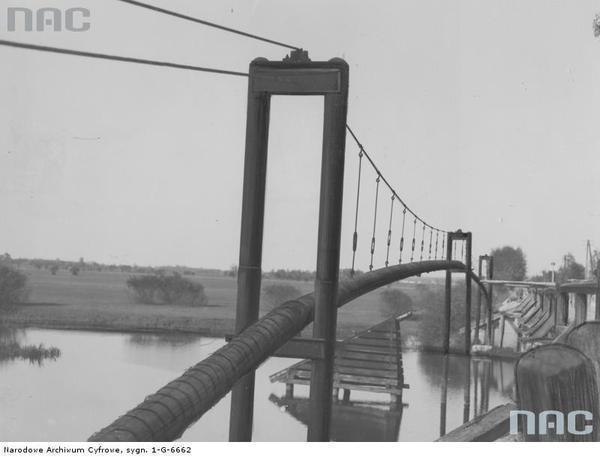 Gas pipeline crossing a river from Lwów to Stryj, Poland (1932)

A pipeline of modest diameter that ran from Dashava, in the Ukrainian SSR, to Tarnów and other towns in Poland was the first international gas pipeline within the Soviet bloc.

This did not start as a grand project to link socialist nations, but as an all-Polish project. Then the borders were moved. The first natural gas field near Dashava (then Daszawa) was found in 1921. Two years later, a pipeline was built from there to the towns of Stryj and Drohobych. In 1928, the city of Lwów (today L'viv in Ukraine) was connected to these wells by an 80km pipeline built by the Polmin company.

During the economic crisis of the 1930s, the expansion of the network stopped and the pipeline was not extended to Tarnów in Poland's Centralny Okreg Przemyslowy (Central Industrial Region, COP) until 1937. The gas was especially important for the large nitrogen works in Moscice near Tarnów.

Following the agreement made at Yalta by Churchill, Roosevelt, and Stalin in February of 1945, the Dashava gas fields, along with all Galician oil wells, became part of the Soviet Union, making the gas pipeline the first international gas link in Eastern Europe.