The jammed bottleneck of Russia 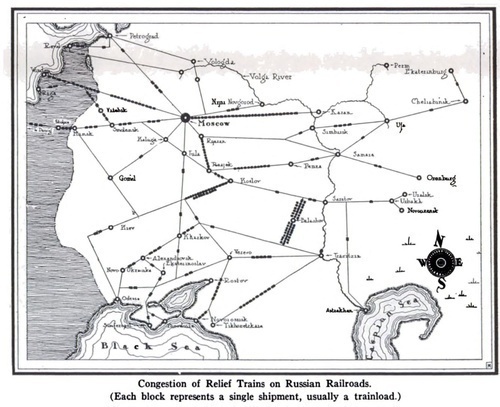 A schematic map of the most congested railway lines during Russian famine of early 1920s. Each block represents one stuck relief train.

The famine that hit Soviet Russia in 1919–1923 was only partly caused by poor harvests. Badly managed food distribution within the country did the rest.

In some countries, such as British India, railway networks had helped to prevent famine by redistributing food supplies. In Soviet Russia, railways actually worsened the shortages in affected regions and considerably handicapped the humanitarian aid received from the American Relief Administration (ARA). It was the ARA's policy not to store anything at Russian seaports, but transfer transferred cargo directly to cars and shipped to the famine districts, as railway situation permitted. While planning deliveries to individual ports, ARA had to consider various factors, but efficient railway connection with the interior was its top priority.

Choosing a Baltic Sea port to supply those starving in northern regions of Russia, and a Black Sea port to supply those in the south, seemed a natural solution. However, the ARA noted that some ports could not accept ocean-going vessels because the port canals were too shallow (as was the case on the Azov Sea), or that the rail links were damaged or clogged (Crimean ports). On the other hand, the relatively accessible docks of Petrograd (St. Petersburg) were oriented toward exports, not imports.

Looking for other ways to unload their grain, the Americans considered Estonian, Latvian, and Finnish ports, but each of these cases required them to act as a mediator between those countries and Soviet Russia. Sometimes the results of such mediation paid off in less expected ways, such as a general Polish-Russian railway agreement. A lot of American grain went through port in Danzig (Gdansk). Poles provided special fast trains to carry the supplies without charge through Poland towards Minsk. Then the grain was transloaded to broad-gauge cars at the border.